Big Money in Our Elections Matters!

‍‍Big Money in our elections distorts our democracy in 2 ways: it affects who we vote for in our elections, and it determines what laws are passed during legislative sessions. And a vast majority of Americans agree that this is a real problem.

Who We Vote For

This is the more direct effect that Big Money has on our elections. Because Big Money determines whose messages we read, see, and hear during campaigns, it defines the group of candidates and the extent to which their messages are distributed. And we probably won't even know where the messages come from, in terms of who is paying for them. "Dark Money" has an impact on all of our elections, local, state, and federal, and we are most often not even aware of its influence.
‍

What Laws are Passed

This is the end result of Big Money in politics: it changes which laws are passed by local, state and federal governments. It is the main objective of Big Money in the first place.

When elected representatives are financially dependent on outside entities for reelection, it should come as no surprise that their votes on legislation will become tied to those donors' unwavering demands. When those donors contribute heavily to large blocks of representatives, which is possible with unlimited campaign contributions, they can control the outcomes on legislation related to their interests. Some of these lobbyists even compose legislation for representatives, and some of those representatives don't even bother reading those bills. Four hundred thirty (430) retired members of congress now have lucrative lobbying or "senior advisory" jobs. The lesson that current incumbents take away from this is they dare not oppose corporate interests while they are serving as elected officials when they look forward to cashing in after they retire.

This makes the corruption that sparked the 17th amendment, the direct election of senators, pale in comparison.
‍

Americans Agree, It's a Problem

Multiple scientifically conducted surveys, over many years, have consistently shown that a super-majority of voters -- regardless of party affiliation --  believe that Big Money is a problem and that a Constitutional amendment is required to solve it.

Liberals and conservatives overwhelmingly support a constitutional amendment that would effectively overturn the Supreme Court’s seminal campaign finance decision in Citizens United v. Federal Election Commission.  Three-fourths of survey respondents, including two-thirds of Republicans and 85 percent of Democrats, back a constitutional amendment to overturn the Citizens United decision. 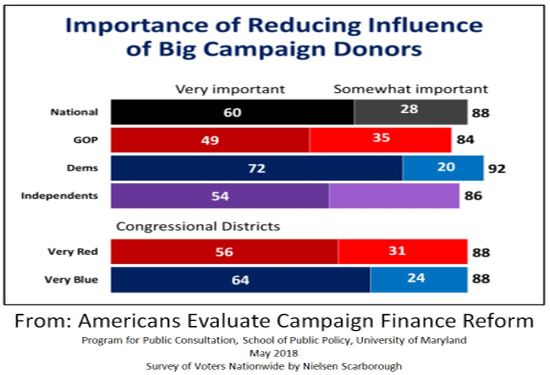